It is a theoretic question on one side: as we all know, Google has stopped PageRank toolbar updates, with the last one being nearly two years ago, on 6th of December, 2013. However, it is not on the other: PageRank is still one of the most important factor when characterizing a domain. Of course, it will disappear as time goes by – as only websites that were live before 2013 can possess PageRank. Thus, PageRank 0 does not necessarily mean that the domain is not valuable – it might just mean that the domain/site is young. One of the most popular link analyzing tool is Open Site Explorer – so let us see if it is as good at determining domain strength as PageRank was. 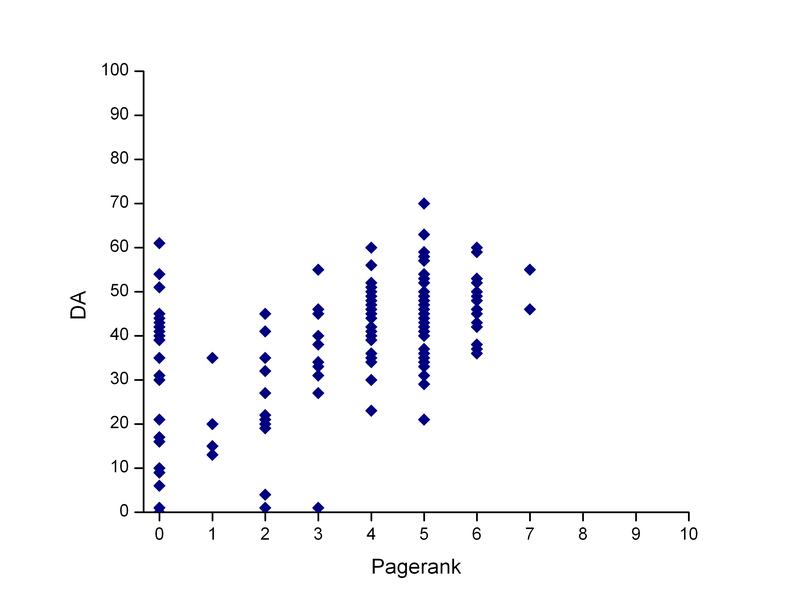 The Figure above shows the correlation of PageRank with Moz DA index in case of 200 domains. (It should be noted that MozRank is thought to be the substitute of PageRank, however, it is much less widespread, so I am analyzing DA in this post). As expected, PageRank 0 is the most diverse in terms of DA value. It seems that DA and PageRank correlates between PageRank 1 and 3, however, average DA value does not increase with PageRank above 4. Although the exact calculating algorithm of PageRank was never published, it was clear that Google placed an emphasis not only on quantity but on quality of the backlinks as well. Quality meant the PageRank, topic, traffic i.e. authority of the linking domain, which DA seems to consider less.  The fact that DA does not correlate well with PageRank (with R= 0.54 for these 200 domains) overall does not mean that it is not a valuable tool. By having more, non-correlated tools as a metric of a domain strength increases the chances of thorough characterization.