Who is the biggest football star of this decade, Lionel Messi or Christiano Ronaldo? They are somewhat different, Messi’s play is about technical skills while Ronaldo has exceptional athletic skills. But we are not going to transform to a soccer portal yet. So let’s rather focus on their online presence and Messi and Ronaldo are different in this field, too. While Ronaldo runs his official website under his full name .com domain, christianoronaldo.com, Messi is not the owner of his own .com domain. Not yet at least.

Messi has just filed an UDRP complaint to take control over the domains messi.com and lionelmessi.com. Earlier UDRP decisions on celebrity names focused on bad faith registration and there is no consensus in decisions.  The first famous cases of Madonna and Sting are great examples from 2000. While Madonna was able to secure her name in an UDRP case, Sting was less lucky and his complaint was rejected because the panel did not find evidence for bad faith registration. Another problem with these celebrity domains is that most of them are used as a fan page, or masked as a fan page. And a fan page might be considered as a good faith registration. This is the case with messi.com which can be classified as a fan page based on its 1 year old Wayback Machine snapshot, however, it is turned down now. 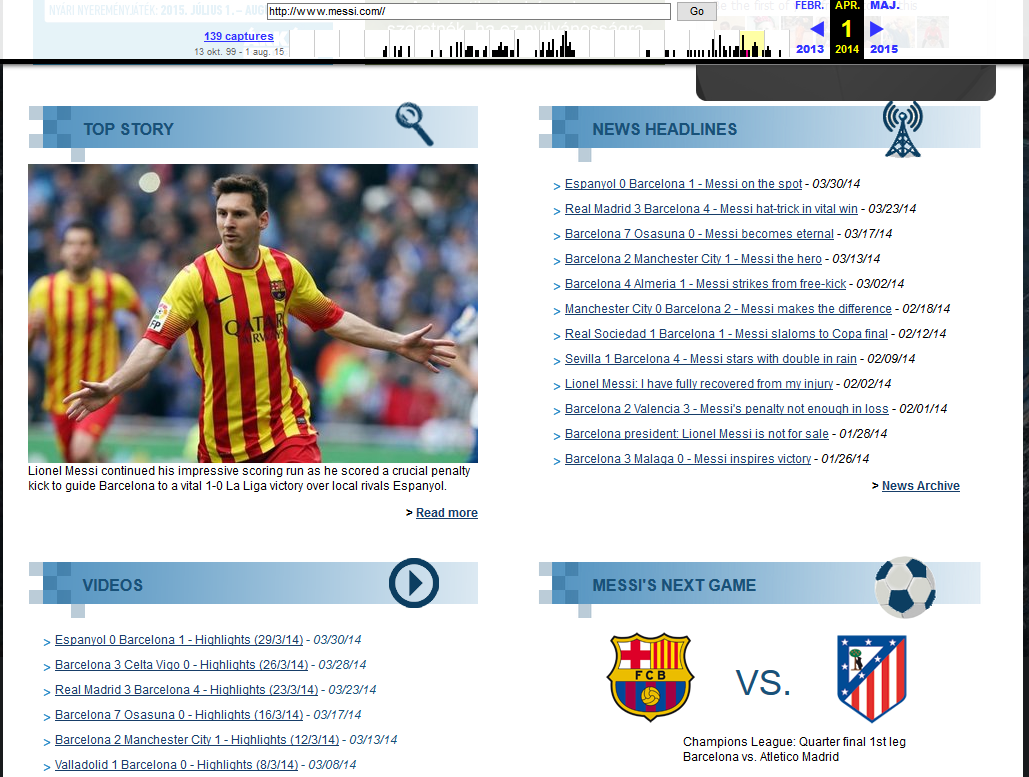 Homepage of messi.com a year ago: is it a bad faith registration?

Some of these fan pages don’t earn money making it harder to take away by UDRP. This was not the case for messi.com, where Adsense banners at the top show that the motivation of the current domain owner was to earn some money from the name of Lionel Messi. The Whois e-mail has no more hits in the database, so maybe messi.com is (was) the only owned domain by this person. The last public sale of messi.com happened in 2008, when it was sold over $3000 on Namejet. It changed hands early this year for an undisclosed but most probably higher amounts.

Anyway, Messi does not have an official English language website. Besides his presence in social networks, the only official site is his Spanish language foundation website, fundacionleomessi.org. His plans are not clear yet that he needs the .com domain for his foundation or as an official website of his football career. But first he has to win the case. He has both great trophies and big disappointments on the pitch. Odds are low here that Messi will win this case. While you are waiting for the results, why don’t watch some magical moments of Leo?