When I make a backorder on Namejet, the first thing I check is that how many backorders were already placed on that domain. If I am alone, instead of being happy, I start worrying that it was a mistake. When there are hundreds of backorders, I almost give it up before the auction starts. Someone will bid too much from so many bidders, no chance. I like auctions with 10-30 backorders, since I feel than the domain is worth buying it and there is a chance that the price will be acceptable. So it is not rocket science that there is a relationship between the number of bids and the maximum bid. But how strong is this relationship? What kind of function do we have here? I decided to try to answer these questions.

First, I have downloaded the results of the last 3 month Namejet auctions where we participated and reserve met (113 auctions) and collected the number of bids for those auctions. Next, I made a scatter plot for Price vs Bids. Since I realized that the plot follows a Boltzmann distribution, I have calculated ideal Boltzmann distribution function parameters to optimize the fit. Check the curve and points below! 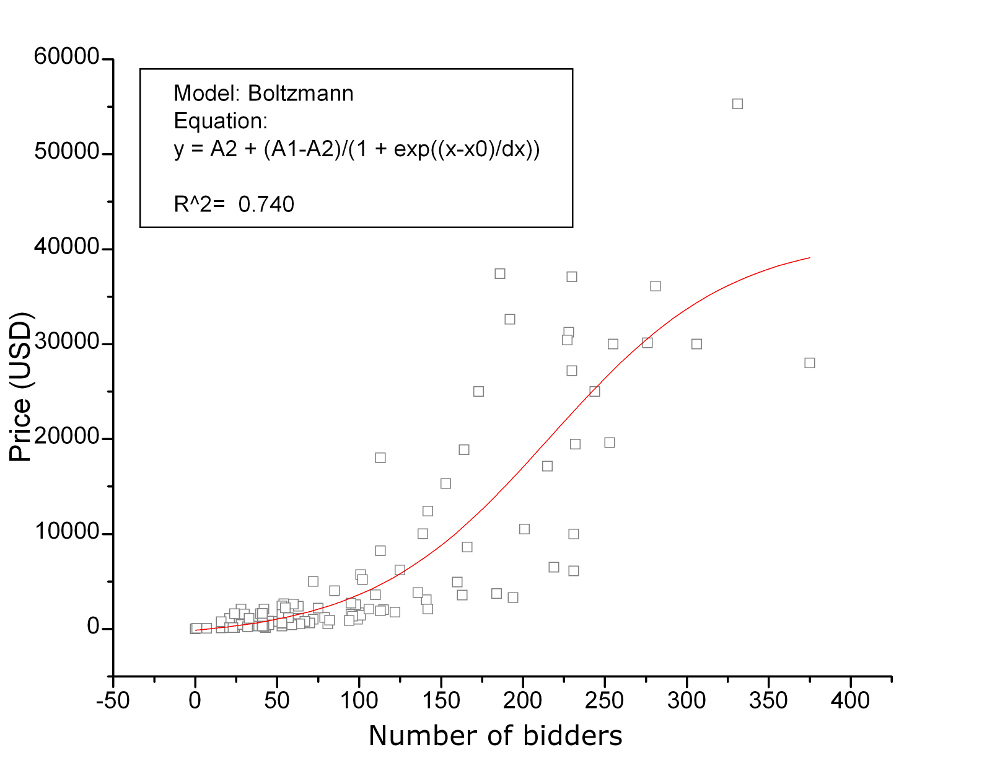 It is not a science blog so don’t want to discuss this further but an R^2=0.74 means a strong correlation between price and bids, so strong that the price can be predicted from the single parameter, number of bids (backorders). This relationship is true until the number of bids are not influenced by an external factor. There are two possible scenario that came to my mind that limits the “freedom” of the number of bids, therefore this correlation will not true anymore:

Back to the correlation for one thought. Of course there are cases when 2 or 3 bidders really want the domain, so much that they are not interested in anything, they will buy it for any price. But oppositely what lot of domainers think about this, it does not happen frequently. There is almost always an alternative domain, if the price is too high bidders quit without problem. Bidding wars above the market price don’t happen often. This is the second thing the function can be used for: you can identify if you are above the curve, it is time to leave.

I made a simple calculator based on the optimized function, so anyone can predict the final price of a Namejet auction from the number of bidders if the number of bids is not limited. Feel free to test it below!

In order to check the validity of the above model, ten recent auctions were analyzed (as external data set). Below you can find a table comparing actual and predicted sales price of ten recent auctions. The results are very good the predicted and actual sales prices are in the same range. Of course, that does not mean a 100% prediction accuracy. Ruca.com was the one with the greatest observed mistake. This is probably because the prices of 4 – letter domains are more defined while many domainers would like to backorder it.