Home > Featured > Marketplaces > Flippa watchers: will they make a bid?

Domain buyers have a common habit: they like to bid at the end of an auction, no matter how long it is. They hope that they can silently get the domain for a cheaper price and don’t generate too must hype with early bidding. I am not sure that this is the best strategy, I like to start with a high bid to frighten away low bidders for the domains I like. But not everyone is brave enough to make a proxy bid and typically auctions start very slowly. I have already analyzed what final price you can expect on Namejet based on the number of backorders. And what about Flippa (domains)? As a seller, you would like to know the final price at the very beginning, when 25 days are left and there is no bid, only watchers. Is it possible to find it out how much will you get finally?

The first important difference between Namejet and Flippa from this viewpoint is that there are no backorders on Flippa, but potential buyers can watch the auction and the number of watchers is visible on the seller dashboard only.

Sellers hope watchers will make a bid once

I think we can safely say that watchers are very similar to the ones who backorder a domain, so there must be an analogous relationship between the number of watchers and the sale price, similarly what we found on Namejet.

There are different kind of watchers:

Sellers tend to think that every watcher is type 5 but unfortunately not. Unfortunately watchers are watchers, you cannot see the type, only numbers. But this is about statistics: more watchers, more type 5 bidders. Anyhow, type 3 and 4 bidders are also great, since they will push your auction to the top of the list and setup a basic price for the serious bidder.

Ok, so there are new watchers day by day but no bids. What you can expect? 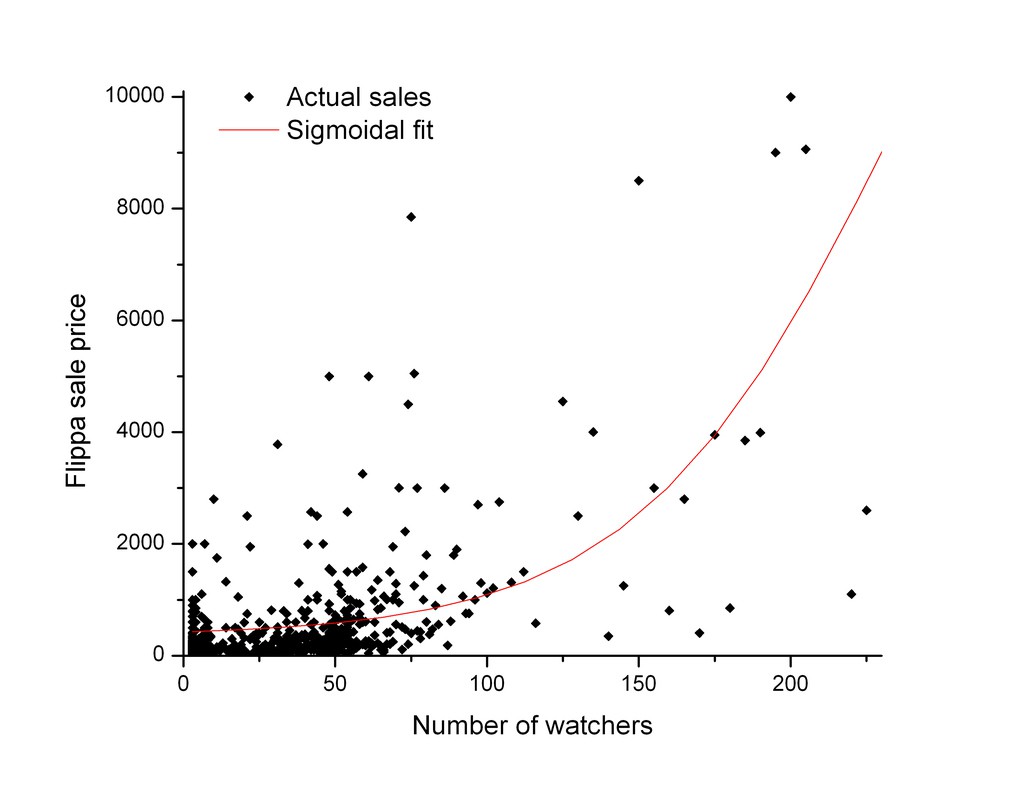 There is a relationship, for sure. A tipping point can be found at about 70 watchers, there is much more type 5 buyers for these domains. If there are less than 50 watchers, you cannot have high hopes as a seller. Great names tend to have more watchers, so the number of watchers is a sign of the quality of the name. Of course the number of watchers is not the only parameter and there are many-many influencing factors that are responsible for the outliers on the curve:

Taking together the general pattern of the sale price vs watchers curve and considering the influencing factors, one can estimate the auction outcome at the very beginning. Good luck!